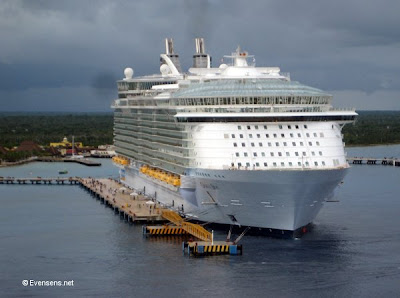 This is Oasis of the Seas, the largest cruise ship in the world and Royal Caribbean's newest ship. 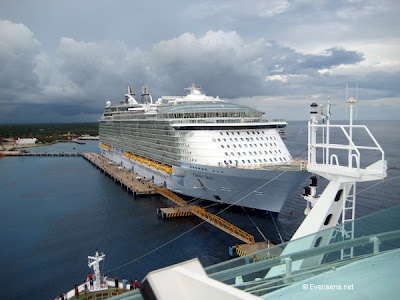 I am on Deck 12 on board Freedom of the Seas which was the world's largest cruise ship until Oasis of the Seas was launched last December.  We are in Cozumel, Mexico, because of an itinerary change due to bad weather. 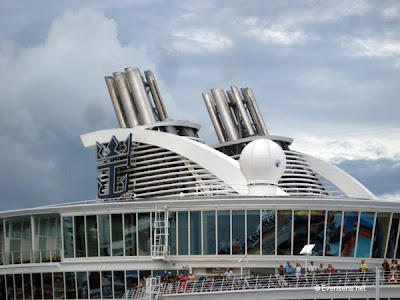 Our ship's Captain Tor Olsen guided our ship smoothly along side the Oasis as people on both ships watched these gorgeous ships  move closer and closer together. 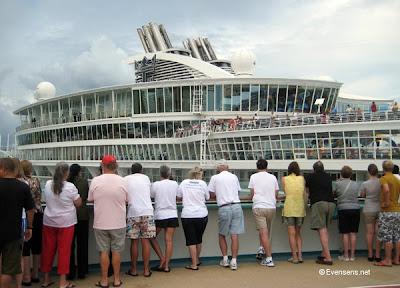 Captain Olsen was on the building team in Finland when Oasis was built so he knows her well. 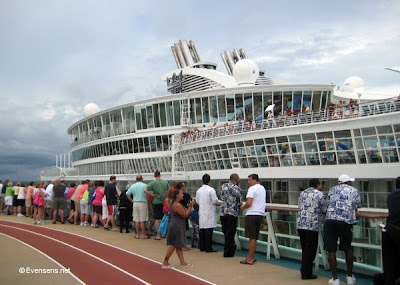 Guests and crew members were excited about seeing Oasis. 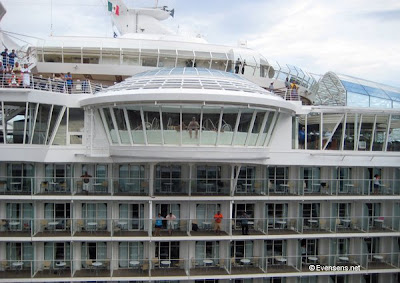 A hot tub at least 13 decks above the sea was a good spot for those on Oasis of the Seas to watch our arrival on Freedom of the Seas. 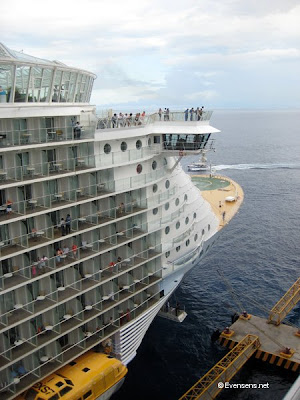 Oasis had backed into the dock, Freedom pulled straight in so we were along side, but faced in opposite directions. 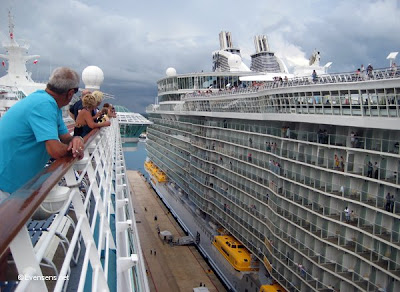 The sheer size of these two ships is so incredible... 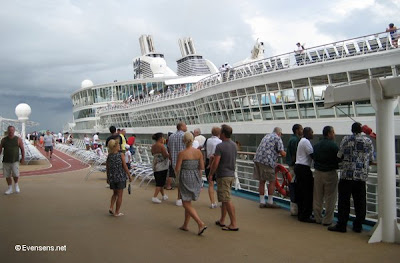 ...that it is hard to comprehend that these structures were designed and made by human beings to travel on the high seas. 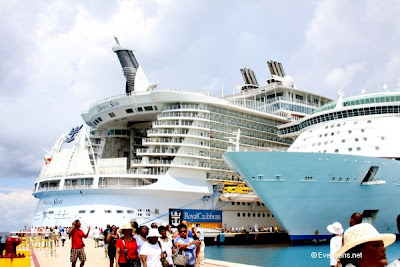 Shortly after lunch I went ashore to take some pictures of the ships side by side.  Oasis is on the left;  Freedom is on the right. 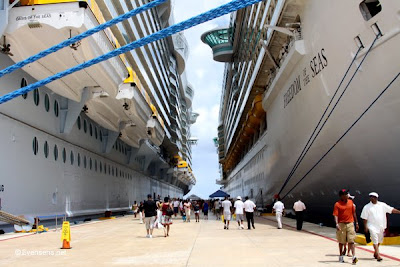 The two ships tied up to the same pier created a ship "canyon." 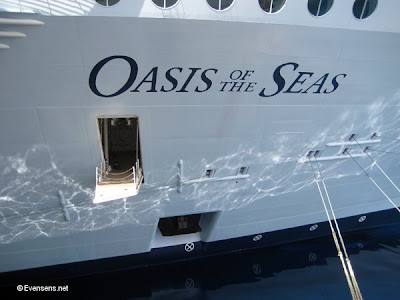 Later I took a walk on Freedom's deck 4 and captured this beautiful image of the water reflection on the bow of Oasis. 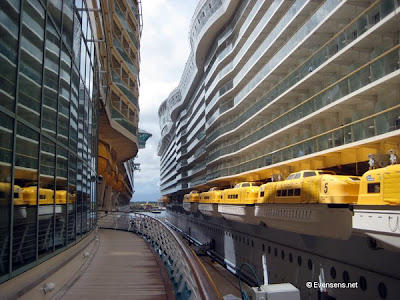 Here is another view of the ship "canyon," this time four decks above the sea... 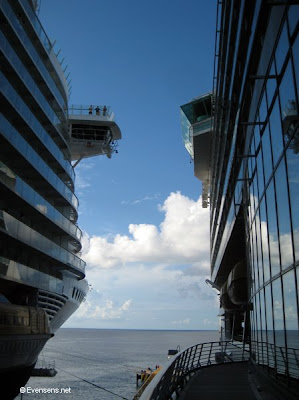 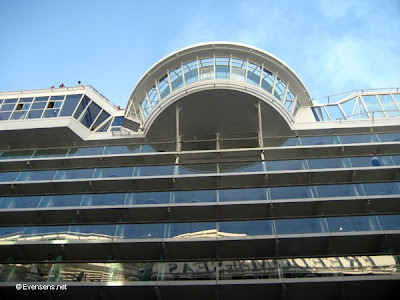 This is another view of that hot tub high atop Oasis that we saw as we entered the port.  Note the reflection of Freedom at the bottom of the image. 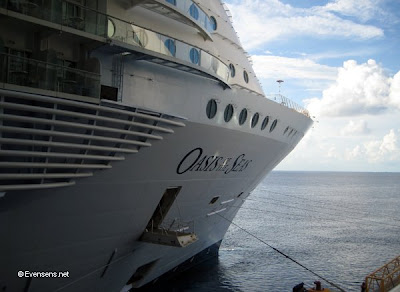 This image was taken just before 7:00 PM as Oasis was preparing for departure. Her giant thrusters allowed her to slide gently away from the pier... 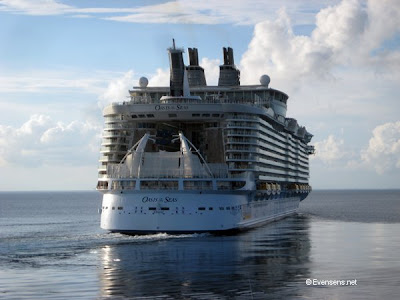 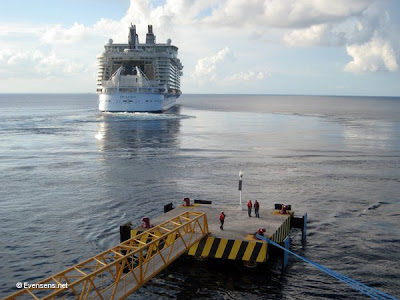 As Oasis sailed away, the dock workers prepared to release the lines so we on Freedom could also move on to our next port. 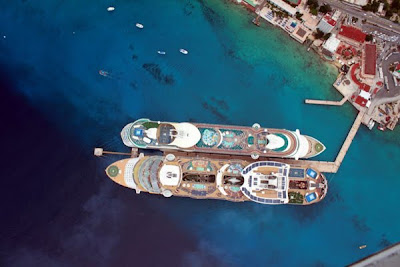 A few days ago I received a couple of images from a friend.  The image above and the following one were taken from a helicopter the same day my pictures above were taken while both ships were along side each other in Cozumel.  The ship at the bottom of the image is Oasis of the Seas;  the ship at the top is Freedom of the Seas.  Amazing. 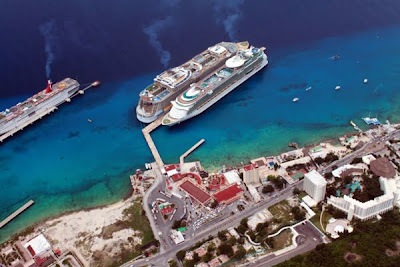 It was the bad weather that required Freedom of the Seas to change her itinerary so we had the opportunity to share Cozumel, Mexico with Oasis of the Seas this day.

Every cruise is a different, exciting adventure.

I hope you have enjoyed these images of this very special day.

My Honey and I first saw Oasis in December, 2009, shortly after she went into service that month.  I have images of her dawn arrival in Nassau here.

Your photos do a great job showing how big that ship is! In some shots it looks like a floating apartment building.

I was surprised that the Oasis of the Seas is quite a bit larger than Freedom of the Seas. I wonder just how much of the ship is below the ocean's surface. I guess the yellow objects are the ship's own shuttles! Very interesting posts, Lois.

Amazing photos! I don't see how those huge ships stay afloat! Loved the arial shots from your friend. wow! ...debbie

absolutely facinating post Lois. I was brouight up in a shipbuilding town, warships unfortunately, but I have seen so many launches yet had forgotten how huge these things are.

First of all I loved Cozumel! Great shopping! The ships are amazing but truly Lois, I don't think that you could get me out of that hot tub!
Love Di ♥

My goodness, what a vacation you are having! And look at all that art on the ship! Ice dancing, vegetable art, towel art, ice sculptures, painters. A lot of talent there!

Yes, everyone, this day in Cozumel with both ships was truly amazing, even for experienced cruisers who are used to seeing big ships. Seeing the two biggest of them side by side is truly spectacular.

Wanda, those yellow things hanging off the side of Oasis are her life boats. It may help to put size in perspective to know that each one holds 350 people. Huge. The life boats on Freedom are tucked under the deck of the ship. Placement makes no difference in their ability to operate and evacuate guests and crew quickly and efficiently.

Little late in catching upo, Lois, but this series showing Freedom and Oasis was simpy amazing. How elegant and HUGE these vessels are and amazing that they seem so graceful. 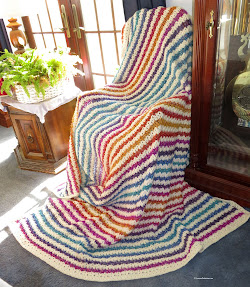