Key West, Florida - A Walk from the Port to the Post Office 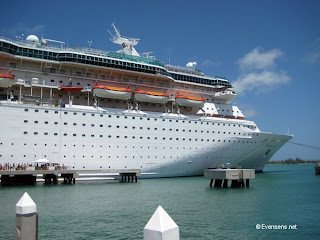 Here's Majesty of the Seas all tied up in downtown Key West, Florida.  This is the only port where I can personally put mail into a US mail box so I walked over to the post office to mail some cards and letters.  These are images I took along the way. 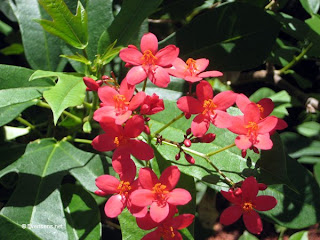 There are beautiful flowers in Key West year round. 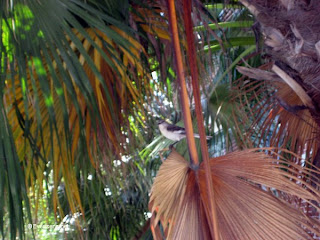 It's not a totally sharp image, but in the center is a little bird that moved enough in the palm fronds that I spotted it quickly. 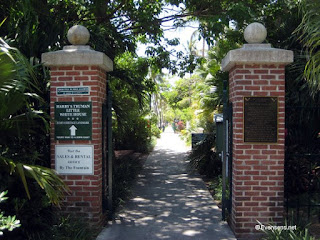 I walked through the Truman Complex out to Whitehead Street.  The Truman Complex includes the Little White House named and used by former President Harry Truman.  Although I am not a fan of President Truman, I am a fan of history.  My honey and I visited the Little White House when we first came to Key West aboard Majesty about six years ago.  No photography of the building itself is allowed because it is still available for use by sitting presidents.  When we took the tour the most recent president who had used it was President Clinton.  The Truman Complex is adjacent to the U.S. Navy Base. 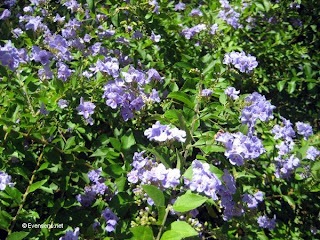 There are beautiful flowers everywhere. 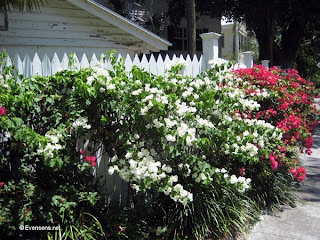 This white picket fence behind the flowers surrounds rental property inside the Truman Complex. 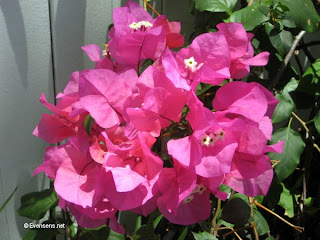 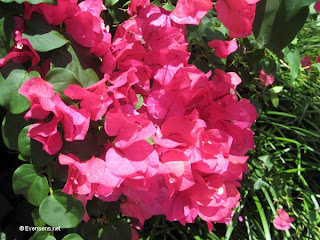 ...in every shade of every color. 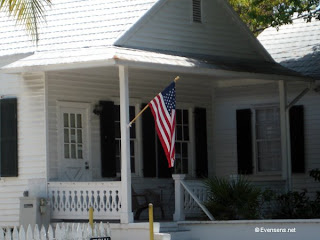 This is a residence on Whitehead Street, just on the other side of the street from the Truman Complex.

Here comes the Conch Train.  This is one way to see Key West.  I've done this at the insistence of someone cruising with me once, but I prefer to walk.  If you have problems walking long distances, though, this is a fun way to see a good part of Old Key West. 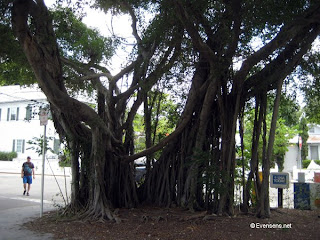 This Banyan tree is on the corner outside the post office.  I went inside and mailed my cards and letters, then headed back to the ship. 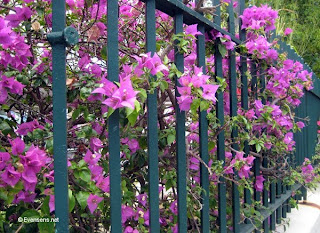 These flowers seem to be escaping the fence on Whitehead Street. 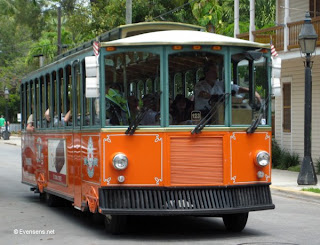 And, the last image for today is the trolley which is another way for tourists to see Key West.

Right after I took this one my cell phone rang and I chatted with my daughter while walking back to the ship.  That's another advantage of being in U.S. ports:  we have Verizon cell phone service throughout the U.S. without any international charges.

I hope you've enjoyed the images taken while walking to and from the Key West Post Office.  :)


Check out Colors of May on Life Looms Large

I haven't been to Key West for probably 20 years. I caught my first fish there when I was 10. It wasn't very big and I cried when I caught it and we put it back. Pretty sites to the post office. The ship is huge. Hopefully one day, I'll get some girls together and go. Have a great cruise!! Happy Mother's day BTW!!! ...debbie

Lois, thank you for the tour and for the pictures of the flowers. They are lovely. We have those pink and purple flowers here, the name escapes me, but they have thorns. Lots of people have them in their yards.

I have never been there...I'm a west coast girl originally. Beautiful pics. Happy Mother's Day to you!

Nice pictures. Even though I was born and raised in Florida and have been all over the state, I've never been to Key West.

Are you still crusing or home now...baking? :)

VERY nice Lois! You really made me feel like I was walking along with you. It is very beautiful there, so glad you are enjoying that wonderful sunshine! Love Di ♥

I'm so enjoying your "postcards from the road" posts! Please keep 'em coming. For some reason I have a real hankerin' to get in my car and drive. But alas...road trips in Italy just don't compare to the US. Have fun.

Lovely photo's.The houses and gardens are beautiful..definately Spring time over there :0)

I enjoyed the walk through Key West. I have never been to Florida, but hopefully we will make it one day, and Key West is definitely on my list to see. The flowers are gorgeous!

Yes, Key West is beautiful and I will have more images of Key West to come. We will be on board until June 11 so have a few more times to stop in Key West and other ports. I also just took some images of sailing out of the Port of Miami.

Before we came to the ship I took images of things we were making in the kitchen and jotted down notes. In addition to travel topics, I'll be getting those recipes together here, too. I also just finished a shawl that I made for a friend's birthday so will publish the pattern for that.

Thanks so much for stopping by and Happy Mother's Day!

Nice!! I've never been to Key West, but your pictures and description make me want to remedy that situation!!

And it's great that you're still on your cruise!! It's a long one....I'll bet that's so relaxing! I love how they take such good care of you aboard ship!

Oh, I love bougainvillea - the bright pinks and purples are so vibrant - Your cruise sounds fun -

I'm looking forward to perusing your blog for the crochet info. Enjoy the rest of your cruise! T.

The Wife and I took a Cruise to this exact same place aboard the Carnival Ship Pride. Even though we did not have much time to explore Key West, I did enjoy visiting there for the first time. At the time we were there, it was quite HOT! Lot's of tourists walking around. We only had about 6 hrs. to spend there. Then Ship sailed for another Port of Call. As you saw, Key West is just full of little shops. All wanting the Tourist money. It was a bit too commercial for me but still enjoyable. 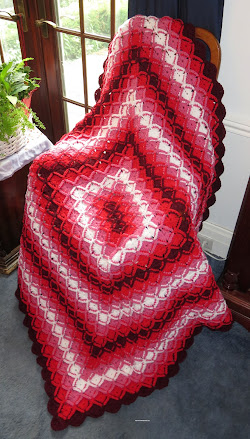