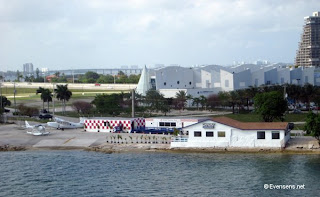 Chalk's Airline, founded in 1919, is an interesting place at the Port of Miami in Biscayne Bay, Miami, Florida.  You may have heard of it because of its colorful and sometimes tragic past. 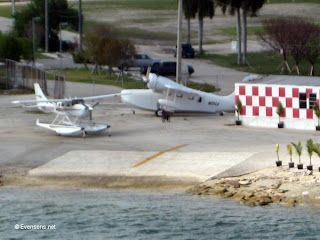 This close up shot (sorry it is fuzzy) of the planes was taken from the deck of Majesty of the Seas tied up across the bay.

This tiny airline has been owned previously by Merv Griffin and Donald Trump at different times.  Itineraries include Nassau, Bahamas, to Atlantis, the resort at Paradise Island.

The airline has had good times and bad, has been through deadly crashes (most recently December 19, 2005), has lost its license to fly, but has managed to make necessary changes to be licensed to fly again.  It's quite impressive to see these planes take off and land in Biscayne Bay.

As impressive as those flights look, I prefer to go to Nassau via cruise ship.  :)

I'm going to agree with you on using them as a way of Transportation...too little for me. I'd be scared to death! Neat info - enjoyed the post!! ...debbie

Interesting story Lois. Your pictures were fine. I would be interested to know what had happened at the airport. I love your new background Lois, very pretty! Love Di ♥

I've flown once on a tiny plane, never again! I don't mind the big planes although I wished there were a way to drive to the Caribbean!

Thanks for calling in on my blog and leaving a comment. I always look poeple up when don't reckonise them, so here I am. I have been snooping around your blog and liked all the recipes and things so I have decided to follow you. So see you around. Keep up the good work.

I agree with all of you about the small planes. I remember flying on a small one long ago to get to Hays, Kansas, a place I never knew existed until I had to go there to connect to another plane to get somewhere fast.

Chalks planes only take off and land on water. The accident, Diana, happened at the end of Biscayne Bay on take off just before Christmas, 2005. The people on board were from the Islands and in Miami Christmas shopping. The plane went down against the South Beach sea wall and several cruise ships were stuck in port and extra day until the feds let them leave after recovery of evidence. We happened to be at home and watched on TV as we communicated with friends on board one of the ships.

Welcome Judith! I enjoyed reading your blog and am delighted you have stopped over here and have joined us, too. I've visited Greece many times by cruise ship. What a beatiful place!

Thanks you, ladies, for stopping by! 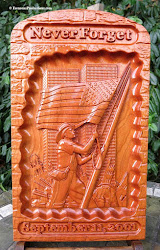